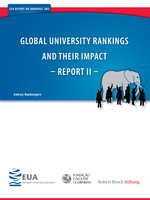 Two years after the publication of the first EUA Report on Global University Rankings in 2011 their number continues to increase, methodologies continue to develop and countless new products are being offered to universities. EUA therefore decided to produce a second report as a service to our members, with the intention of documenting the new developments that have taken place since 2011 and also drawing attention to the consolidation of the overall phenomenon of rankings, and their growing impact on universities and in the public policy arena.

There have been countless discussions on rankings and their significance for universities and policy makers in the last two years. EUA hopes that this second report will help to ensure that future debates are well-grounded in reliable information and solid analysis of the methodologies and indicators used, and ensure the usefulness of the new products being developed. We would also hope that our work contributes to making universities and policy makers alike more aware of the potential uses and misuses of rankings, and their impact, for example, on student recruitment, immigration policies, the recognition of qualifications and choice of university partners. These developments indicate the need to reflect on the extent to which global rankings are no longer a concern only for a small number of elite institutions but have become a reality for a much broader spectrum of universities as they seek to be included in, or improve their position in one or the other rankings. This means that they have started to shape the development of higher education systems as such which is a significant shift bearing in mind that most international rankings in their present form still only cover a very small percentage of the world’s 17,500 universities, between 1% and 3% (200-500 universities), with little consideration given to the rest. As such, they are of direct relevance for only around half of EUA members, but at the same time they still impact the rest of EUA members through the policy influence described above.

Given these developments at a time when higher education is increasingly becoming a global business, with institutions large and small operating in a competitive international environment, the first part of the report focuses on the main trends observed and analyses the different ways in which rankings are affecting universities’ behaviour and having an impact on public policy discussions. Governments’ interest stems from the fact that they see universities as key actors in the globalisation of higher education and research, which they consider as important for national and regional competitiveness and prosperity; hence their interest in having their universities well-placed in global rankings. One effect observed both top-down from the side of governments in some countries and bottom-up at the initiative of individual institutions is that of increasing interest in institutional mergers and consolidation to different degrees with a view to improving competiveness, and thus also positioning in the rankings.

The second part of the report focuses on detailed descriptions and analysis of the changes since 2011 in the methodologies used by the main international rankings and the new products and services on offer. It also refers to rankings that are perceived to be growing in importance and interest, or were not in existence two years ago. As in 2011, the report uses only publically available and freely accessible information. This detailed analysis is intended to support universities in understanding the degree to which the various rankings are transparent, from a user’s perspective, of the relationship between what is said to be measured and what is in fact being measured, how the scores are calculated and what they mean. This is all the more important now that the main ranking providers are offering a whole range of (paying) services to institutions, in most cases based upon the information that institutions have provided to them free of charge.

Looking to the future it is evident that given the increasing internationalisation of higher education and the competitive pressures on institutions, the debate on rankings will continue. EUA will continue to play an active role in these discussions focusing in the coming two years in particular on learning more about their specific impact on higher education institutions. This will also include constructively critical monitoring of the present implementation phase of the U-Multirank initiative.

PART I: An analysis of new developments and trends in rankings since 2011

PART II: Methodological changes and new developments in rankings since 2011