Patent Assertion and US Innovation 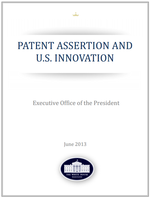 Patent Assertion and US Innovation

Some firms that own patents but do not make products with them play an important role in U.S. innovation ecosystem, for example by connecting manufacturers with inventors, thereby allowing inventors to focus on what they do best.

However, Patent Assertion Entities (PAEs, also known as “patent trolls”) do not play such roles. Instead they focus on aggressive litigation, using such tactics as: threatening to sue thousands of companies at once, without specific evidence of infringement against any of them; creating shell companies that make it difficult for defendants to know who is suing them; and asserting that their patents cover inventions not imagined at the time they were granted.

While aggressive litigation tactics are a hallmark of PAEs, some practicing firms are beginning to use them as well. (“Practicing” firms use their patents to design or manufacture products or processes.)

PAE activities hurt firms of all sizes. Although many significant settlements are from large companies, the majority of PAE suits target small and inventor-driven companies. In addition, PAEs are increasingly targeting end users of products, including many small businesses.

PAEs take advantage of uncertainty about the scope or validity of patent claims, especially in softwarerelated patents because of the relative novelty of the technology and because it has been difficult to
separate the “function” of the software (e.g. to produce a medical image) from the “means” by which that function is accomplished.

A range of studies have documented the cost of PAE activity to innovation and economic growth. For
example:

History suggests that it should be possible to address these challenges. Similar cases occurred with patents for agricultural equipment and for railroad equipment in the late 19th century, in which there was great uncertainty about whether a valid patent had been infringed. Once these underlying conditions were changed, this business model was no longer profitable and litigation of this type fell dramatically.

Policies such as the following: fostering clearer patents with a high standard of novelty and nonobviousness; reducing disparity in the costs of litigation for patent owners and technology users; and
increasing the adaptability of the innovation system to challenges posed by new technologies and new business models; would likely have a similar effect today.

II. The Role of Intermediaries in the Patent System