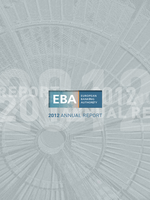 The EBA 2012 annual report portrays the work of the European Banking Authority in its second year of activity. It has been another very challenging year, still characterised by difficult market conditions for European banks and a complex process of institutional and regulatory repair. But much progress has been made, and I believe we can be proud of the role played by the EBA in shaping the environment for a more stable banking and financial sector in the European Union.

The first priority we faced was to significantly strengthen the capital position of EU banks and dispel concerns on their ability to withstand further shocks. Market concerns were driving a funding squeeze for European banks, which was adversely impacting the banks’ lending capacity and the recovery of the European economy. We focused our attention on the capital of the highest quality (Core Tier 1 — CT1) and requested a buffer well above the minimum requirements, even with reference to the stronger benchmarks foreseen by the G20 agreements for the first years of implementation of the so-called Basel III standards. We also asked for a conservative treatment of sovereign exposures, which was in our view essential to alleviate the perverse interconnection between the banks and their sovereigns and ensure additional safety for the banks of the countries under stress. The Ecofin Council strongly supported the EBA recommendation and requested that the necessary balance sheet adjustment were not achieved through a pro-cyclical reduction in lending to the economy. Another important element of the puzzle was to ensure that this complex adjustment was conducted through capital plans thoroughly discussed and agreed within colleges of supervisors, so as to avoid a home bias in the deleveraging process. Looking backwards, I believe we achieved all the objectives we had set: in 2012 banks improved their capital positions by more than EUR 200 billion and are now fairly close to fulfilling the final Basel III requirements for CT1; the shortfall we identified was almost entirely (96 %) covered with direct capital actions, while reduction in lending was recognised only in a few, marginal cases in which specific requirements were imposed by national and European authorities; the whole process was managed with the active involvement of colleges of supervisors; the banks that didn’t manage to achieve the targets were supported by government backstops or put under restructuring.

It is important that supervisory pressure on balance sheet repair remains high. Asset quality has been deteriorating and in-depth reviews conducted by supervisors have been essential in ensuring an adequate recognition of losses. Further efforts are needed to address remaining pockets of vulnerabilities and dispel market concerns on asset quality. The work initiated by the EBA to reach consistency in the calculation of risk-weighted assets is another important element in the action for strengthening the confidence in European banks’ balance sheets. Banks should prepare and implement plans for further capital strengthening, in order to comply with the internationally agreed standards, also under stressed conditions. We continue emphasising the role colleges of supervisors should play in smoothly driving this adjustment process, and the EBA staff is fulfilling an important task in coordinating the supervisory activities within the colleges of the 40 largest EU crossborder banks. Such coordination has proved crucial especially against the backdrop of risks of fragmentation of the EU single market triggered by the deterioration of the financial crisis.

Foreword by the Chairperson

Interview with the Executive Director