The Competitiveness and Innovative Capacity of the United States 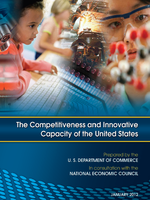 The Competitiveness and Innovative Capacity of the United States

The U.S. economy reigned supreme in the 20th century, becoming the largest, most productive, and most competitive in the world; amazing new technologies were invented and commercialized; the workforce became the most educated in the world; and incomes soared while a large middle class emerged and thrived.

As the 21st century approached, however, alarms began to sound about the U.S. economy’s ability to remain in this preeminent position. Incomes stagnated and job growth slowed. Other countries became better educated and our manufacturing sector lost ground to foreign competitors. Observers have expressed concern that the scientific and technological building blocks critical to our economic leadership have been eroding at a time when many other nations are actively laying strong foundations in these same areas. In short, some elements of the U.S. economy are losing their competitive edge which may mean that future generations of Americans will not enjoy a higher standard of living than is enjoyed in the United States today.

Innovation is the key driver of competitiveness, wage and job growth, and longterm economic growth. Therefore, one way to approach the question of how to improve the competitiveness of the United States is to look to the past and examine the factors that helped unleash the tremendous innovative potential of the private sector. Among these factors, three pillars have been key: Federal support for basic research, education, and infrastructure. Federally supported research laid the groundwork for the integrated circuit and the subsequent computer industry; the Internet; and advances in chemicals, agriculture, and medical science.

Millions of workers can trace their industries and companies back to technological breakthroughs funded by the government. The U.S. educational system in the 20th century produced increasing numbers of high school and college graduates, more so than anywhere else in the world. These highly skilled workers, in turn, boosted innovation. The transformation of infrastructure in the 20th century was nothing short of amazing: the country became electrified, clean water became widely available, air transport became ubiquitous, and the interstate highway system was planned and constructed. All of these developments helped businesses compete by opening up markets and keeping costs low.

Common to all three pillars—research, education, and infrastructure—is that they are areas where government has made, and should continue to make, significant investments. For a variety of reasons, the private sector under‐invests in these areas so the government needs to step in to bring investment up to the socially optimal levels. An additional common thread between these three pillars is that the benefits of these investments took years to be fully realized. For instance, we are still benefiting today from investments made in the 19th century, such as the Morrill Act of 1862, which laid the foundation for the land grant university system in all states. In the 20th century, World War II‐era research became the basis of the transistor; and in the 1960s, all of the benefits from investing in science made the United States the leader of the space race as well as the information technology industry. This long‐term outlook should not be forgotten.

The need for the Federal government to play an important role in the first pillar— research, particularly basic research–derives from the fact that there is a divergence between the private and social returns of research activities which leads to less innovative activity in the private sector than is what is best for our country. However, government support of basic research can remedy this problem.

The benefits from Federal research and development (R&D) support are not just theoretical: as mentioned above, the Federal government has played a crucial role in the development of many key innovations of the mid‐ to late‐20th century.

Federal funding for basic research has been increasing, but at a slower pace than economic growth. To improve the trajectory of American innovation, thoughtful, decisive, and targeted actions are needed, some of which already have been proposed.

These actions include sustaining the levels of funding for basic research by the Federal government, extending a tax credit for private‐sector R&D to give companies appropriate and well‐designed incentives to boost innovation above the baseline level that would have been reached absent these incentives, and improving the methods by which basic research is transferred from the lab into commercial products.

Education, the second pillar, is also critical to foster innovation and to increase living standards. The advances in education in the 20th century helped propel the economic rise of the United States as it became the richest nation on the planet.

However, by many measures, the U.S. education system has slipped. By some accounts, the United States’ system of higher education remains the best in the world and educates our country’s and our competitors’ future scientists and engineers, factors such as poor preparation in math and science and the high cost of college tuition and expenses are restricting the flow of American science, technology, engineering and mathematics (STEM) graduates from our universities.

Ongoing and new Administration initiatives are addressing these challenges by making college more affordable, spurring classroom innovation at all levels, expanding the size and quality of the STEM teacher ranks, and encouraging and facilitating students’ and workers’ continued STEM education.

In the past, the United States led the way in several key areas of infrastructure development, the third pillar of innovative capacity, starting with the railroad system of the 1800’s. In today’s economy, the nature of infrastructure needed to compete is changing and the United States is lagging behind in certain key aspects of a 21st century infrastructure (such as broadband Internet access) and facing capacity constraints for other aspects (wireless communications) given the high demand for these services. Ensuring that the United States has the infrastructure it needs to be competitive in the 21st century will require both additional support by the government and an appropriate policy framework to enable the private sector to build on the government’s support.

Increasing the competitiveness and the capacity to innovate goes beyond improving research, education, infrastructure and manufacturing. Many other policies that ensure the private sector has the best possible environment in which to innovate contribute to competitiveness, including incentives to form regional clusters, promotion of exports and access to foreign markets, the level and structure of corporate taxes, and an effective intellectual property regime (domestically and abroad). In each of these areas, the Federal government has an important role to play.

The challenges are great, but the United States has a strong base on which to build and to rise to these challenges. There are clear actions that can help this nation regain its innovative and competitive footing. To succeed, we must have the will to implement and to sustain the policies that will prepare the United States to continue to be an economic leader in the 21st century.

1. Rising to the Challenge

2. Keys to Innovation, Competitiveness, and Jobs

3. Federal Support for Research and Development

5. Infrastructure for the 21st Century

7. The Private Sector as the Engine of Innovation