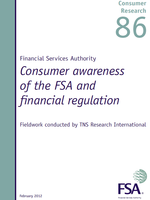 This report contains results from the 2011 Financial Services Authority (FSA) Consumer Awareness Survey. We carry this out once a year and it enables the FSA to identify risks and take appropriate action to mitigate risk and improve performance. Here, we summarise the main findings.

One in eight people surveyed have no financial products. Nearly four in five have a bank account, with three in five having a savings account. More than one in four have a tax exempt special savings account (TESSA) or cash ISA.

One in three has a mortgage of some sort, the same proportion as hold life insurance, but only one in eight holds mortgage protection life insurance. One in six has a personal pension.

Nearly three in five have motor insurance but fewer than one in two holds contents and/or buildings insurance.

About one in ten has accident, illness or unemployment insurance, but one in 25 have PPI.
Financial product ownership is greatest among 35-54 year olds (working; ‘family formation’ decades).
Saving and pension product take up among 16-24 year olds is relatively low.

Profiling by Experian’s Financial Strategy Segments reveals differences between key lifestage and lifestyle groups, with both younger and older less affluent groups being less likely to have financial products or to be aware of the FSA (and therefore financial regulation).

Awareness of the FSA

Awareness of the FSA has remained relatively static among around a third of survey respondents over the lifespan of this survey (nine iterations). Not surprisingly, awareness of the FSA is higher, at nearly one in two, among those groups with greater exposure to financial products, and is higher still among those with exposure to products with a greater risk such as shares and equity ISAs. More than two in five people surveyed have no knowledge of a regulator, but this drops to one in three of those aged 35-64 who are the main users of a wider range of financial products.

One in three people, overall, thinks that the main responsibility of a financial watchdog should be to ensure that firms treat their customers fairly. One in four thinks that it is to prevent misselling.

One in six believes that a financial watchdog should ensure that only appropriate people or firms can operate in the market, and one in ten thinks that such an organisation prosecutes firms and individuals.

Of those surveyed, 60% are confident that the FSA effectively regulates the financial services industry, but only 5% are very confident that it does so. Nearly one in five people are unconfident.

Confidence has returned after a low of 38% in 2009, despite the prevailing market and economic conditions.

Sixty two percent are confident that firms follow FSA rules, but only 4% are very confident and 17% are unconfident. Fifty nine percent believe that all or most firms meet relevant authorisation standards (only 6% think all do) or reach prudential standards (10% think all do), and fewer — 51% — believe that all or most firms meet the FSA’s Conduct of Business (CoB) standards, with only 7% thinking that all firms do. Around one in six people surveyed believes that few or no firms reach these standards, slightly more so for prudential requirements. This is higher among those who are unaware of this activity.

There are some positive changes from the 2010 results :

When asked why they were not confident that the FSA is effectively regulating the financial services industry 30% quoted personal experience, with 44% citing press reports.

The survey asks people about their risk profile. Overall three in five have no appetite for risk at all on investments, with far fewer — 4% — prepared to take risks to gain higher returns. The population is slightly more risk averse than in the preceding 2010 survey. Spontaneous awareness of the FSA was slightly greater among those who have higher risk products and a greater disposition to risk for gain.

People in this survey do not generally know how to categorise financial products in terms of risk, but this does fall among those who have bought these products. For example 30% of consumers did not know the risk profile of investment with profit bonds, but this falls to 15% amongst those with these products (though still a significant lack of knowledge).

Over one in three people surveyed believe that financial services firms are not allowed to go bankrupt because the government or regulator will always bail them out. One in five holds that this is because some firms are too important to be allowed to go bankrupt. Fewer — around one in eight — believe that this is because too many consumers would be affected (12%) or because people lose confidence in the financial system (14%). Only 8% believe that this would be because the government would never allow consumers to lose money.

Fifty five percent of people surveyed are confident that financial firms treat their customers fairly— but only 4% are very confident, and by contrast 13% are unconfident. Comparing year-on-year survey data shows that people think that firms have become ‘less worse’ at treating customers fairly - while less people report that firms are worse, the shift has been to there being no year-onyear change rather than firms showing an improvement. People were comparatively less confident about insurance companies treating their customers fairly.

Consumer switching in financial services product markets remains relatively low — typically around 3-6% in any product in the last year —with the exception of motor insurance (13%), along with levels of consideration of product switching. Where people switch it is generally driven by price and the need for cost savings, followed by standards of service, although the latter drives current account switching more, with the offer of additional benefits (packaged accounts) making more of a difference than for savings accounts or cash ISAs.

More than one in nine people (11%) surveyed report having a problem with a financial services firm in the previous 12 months. One in three of these problems stemmed from poor customer service, with slightly fewer resulting from handling of complaints. Other problems included money transfer delays (12%); confidence in advice given (9%); being refused service (8%), and pressure selling (7%).

Over half of the people surveyed (55%) were very or fairly confident that complaints would be resolved fairly, but over one in six were not confident of this outcome. Awareness of regulatory bodies does not impact positively on confidence.

More than one in six of those surveyed (17%) had received professional financial advice in the preceding 12 months, nearly half of whom from an independent financial adviser (IFA), and two in five from a bank or building society. Three out of five people receiving advice from an IFA were very confident that the advice was appropriate to their circumstances — compared with 33% of those going to banks or building societies. Most were at least fairly confident of this, irrespective of the source of the advice.

Nearly three in ten people surveyed had suffered from some form of financial crime in the previous 12 months. This has remained unchanged compared with previous surveys. False lottery / prize draw winning was the most common crime (16%) followed by phishing (11%) and foreign country money transfers (10%). Feelings of vulnerability to financial fraud have dropped year on year in the survey, from 27% feeling more vulnerable in 2009, to 17% stating so in 2011. However, feelings that people are less likely to be vulnerable have not changed.

Nearly three in five people surveyed feel that they have enough information to protect themselves from becoming a victim of fraud, and would know where to go for more information. However, this leaves over two in five feeling the opposite. More people would go to the internet for information (35%) than to a financial services institution (20%) or government / public body (10%). More would rely on friends and family (15%) than law enforcement (10%).

When prompted with a range of options of who to contact to get more information about financial fraud: over two out of five (45%) of consumers would search using an internet search engine; one in three (35%) would enquire at their bank or building society one in four (23%) would speak to their local police.

About one in four people surveyed say, unprompted, that they shred all unwanted financial correspondence, with over one in four (28%) saying that they avoid giving their details over the phone. Slightly fewer (23%) avoid giving details on the internet, and one in five never writes down their PIN (personal identification number). Fewer, one in six (17%), never write down their passwords. However, even when prompted only one in eight consumers say they regularly update their virus software, and only one in ten avoids emails from unknown sources.

4 Awareness of the FSA